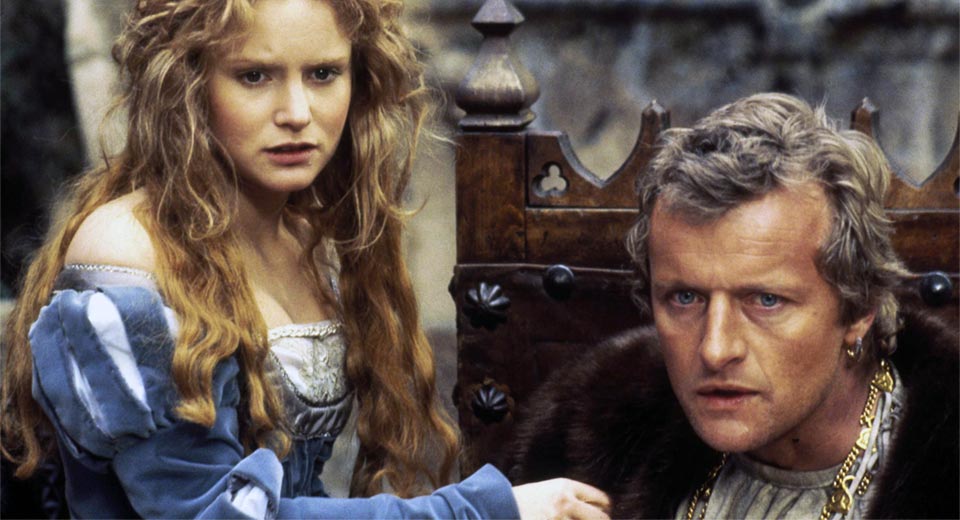 Paul Verhoeven’s English language debut, the 1985 medieval fever dream Flesh + Blood, mingles sex, death, dirt, vomit, blood, and pus in a hallucinatory march through the anarchic, plague ridden landscape of Western Europe. The Dutch filmmaker evokes Hieronymus Bosch and Bruegel by way of Monty Python and Pasolini’s medieval eros and thanatos-soaked adaptations of The Decameron and The Canterbury Tales. Verhoeven’s Middle Ages, like Pasolini and Boccaccio’s, is filled with violence, greed, blasphemy and moral and sexual ambiguity, but channeled into an action/adventure epic, which manages to stay provocative and daring with its graphic sexuality, nudity, and feudalism-based class critique while still delivering swashbuckling thrills. This union of popcorn flick fun and uncompromising visionary genius is a balancing act the director has proven he is uniquely capable of pulling off, giving audiences muscular big budget entertainment with deeply satirical and subversive skeletons.

Rutger Hauer plays Martin, a mercenary soldier who, along with his colorful band of marauders, is betrayed by their feudal lord employer and denied the plunder they were promised for their violent work. Martin and his group take revenge by kidnapping Agnes (Jennifer Jason Leigh), the bride-to-be of their employer’s son, Steven. The plot follows the lord’s rescue attempt while also revealing the internal struggles of Martin’s group and his blossoming relationship with Agnes.

The real story unfolds in Agnes’s relationships with Martin and Steven. The young woman both explores and uses her sexuality to control her circumstances, oscillating between submission and domination. The film expertly depicts the tension between the seeming innocence of her love for Steven and the emotional and physical connection she finds with Martin. Flesh + Blood prefigures Verhoeven’s recent psychosexual thriller Elle in its examination of the shadow side of human sexuality and love, our strange, sometimes self destructive desires, and the power they often hold. This brilliantly comes to light in a scene where Agnes digs up a mandrake from beneath two hanging corpses. In this moment, the dual drive of both sex (the hanged men are said to ejaculate upon dying) and death—the psychological and thematic center of the film and Verhoeven’s metaphoric vision of the dark ages—is quite literally unearthed.

Flesh + Blood is streaming for free on Tubi and Pluto. (April 2021)