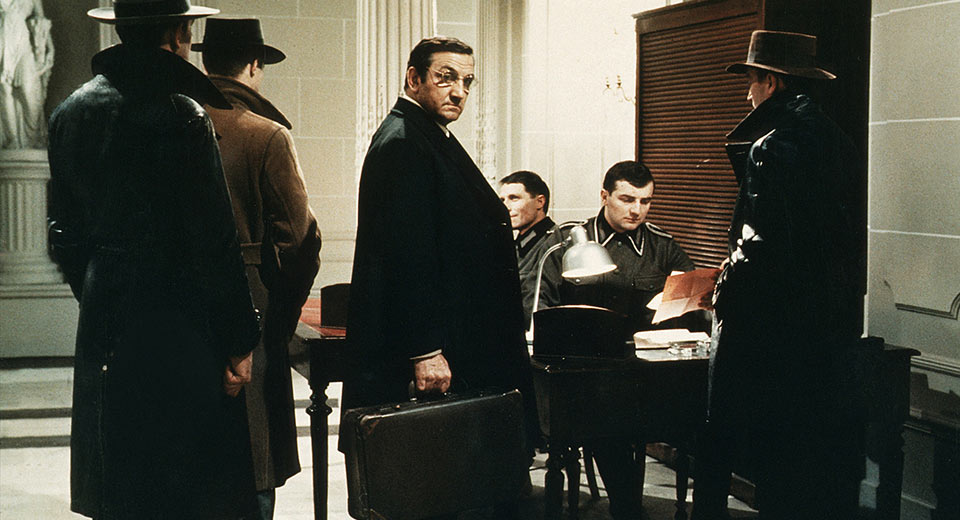 At the risk of moralizing, a question: what justification do we have for mining the atrocities of recent history for thrills? Comedy eases the pain, melodrama frames the historical in psychological terms, but suspense? It feels cheaper, turning the very real into the simply invigorating. What’s the ultimate purpose of a film like United 93, which jolts audiences effectively without deepening our sentiments or knowledge concerning the 9/11 attacks? Are the ghetto raids of Schindler’s List too exhilarating? Jean-Pierre Melville’s haunting Army of Shadows (1969) sports setpieces as literally breathtaking as the centerpiece heist sequence of his own Le Cercle Rouge (1970), but concerns the true-life exploits of resistance fighters in Vichy France. Melville ultimately justifies the film’s aesthetic audacity with an unsettling examination of the moral cost of political righteousness.

Most of the squad's fight occurs off-camera. Led by granite-faced Lino Ventura, the group smuggles people and documents across borders, but their main business seems to be ferreting out informers and ducking for cover in farm houses. Melville’s screenplay emphasizes the Hitchcockian paranoia of police checkpoints and empty alleys. There’s no ass-kicking or derring-do. The few guns onscreen belong to Nazis. When a turncoat must be executed, we’re spared the heroic fisticuffs. He accepts his death sentence and the horror of the situation shifts to the semi-reluctant executioners who are duty-bound to strangle a former comrade.

Ventura’s character works the Melvillian stoic cool — nice suit, blank face, economical manner — until confronted with the blitzkrieg. Unlike Melville’s chilly noirs — 1967’s Le Samouraï in particular — the glassine machismo of the Hawksian professional is presented here as facade against the enormity of the task. Ventura scarcely blinks under Nazi surveillance, but is visibly unnerved to witness British soldiers dancing and flirting while bombs blanket London. Melville repurposes the tough guy veneer as imperfect survival mechanism.