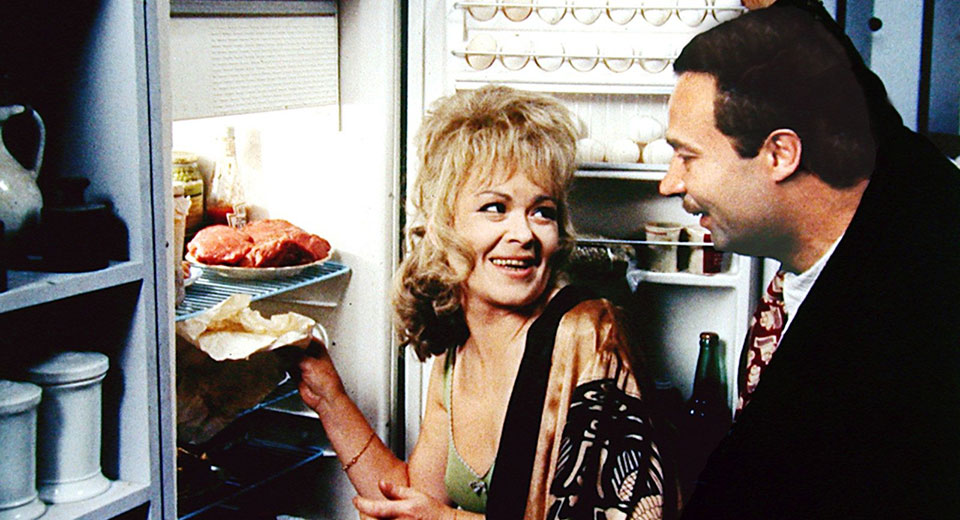 Let’s keep the party going on this trendlet in New York rep cinema, wherein the heretofore unexamined filmographies of forgotten women are wrested from obscurity and given their long-awaited due. Production designer, scenarist, costumière, and director Ester Krumbachová played a titanic role in shaping the much-loved aesthetic of Czechoslovak New Wave – name a more iconic duo than Maries I and II – but her reputation is nowhere near as prominent as collaborators Vera Chytilová or husband Jan Němec. To what can we attribute this neglect? A pesky auteurist indifference toward the medium’s applied artists? The more likely culprit could be an institutional curtailing of Krumbachová’s short directorial career – beginning, and ending, with The Murder of Mr. Devil.

An unapologetically solicitous manner, coupled with the ticking time bomb of “fading youth,” makes our single-and-liking-it heroine a particularly soft touch; Mr. Devil, a long-gone girlhood crush, slithers back into her life, returning not as the svelte engineer of memory but as a slovenly and charmless homunculus. In clever, stylish direct-to-audience monologues, narrator-protagonist Kate explains her rationale for overlooking her paramour’s abundant shortcomings: she is powerless against loneliness, and all too fond of male company. Expanding waistline and boorish table manners notwithstanding, she continues to ply him with elaborate home-cooked meals and coquettish contributions to their largely one-sided conversations. In the little microcosm or Kate’s bachelorette pad, women exist to service the male brain, stomach, and whatever else they have laying around.

Lesser American romantic comedies seldom engage with the nuances that motivate unmarried women and, were this film made today, we’d no doubt be treated to a montage of Kate feeding her cat, weilding a vibrator, and eating peanut butter out of the jar — before the inevitable act two arrival of “Mr. Right.” Thankfully, this gift of a film spares us these indignities by wantonly satirizing the outmoded notions that conspire to transform an otherwise capable woman into a gas range with a pussy. If men “are trash,” as the old saying goes, Mr. Devil interrogates the receptacles, waste treatment plants, and landfills we inhabit together. Rather than choosing sides within the battle of the sexes, Krumbachová opts instead for a wry slant on the whole messy affair.